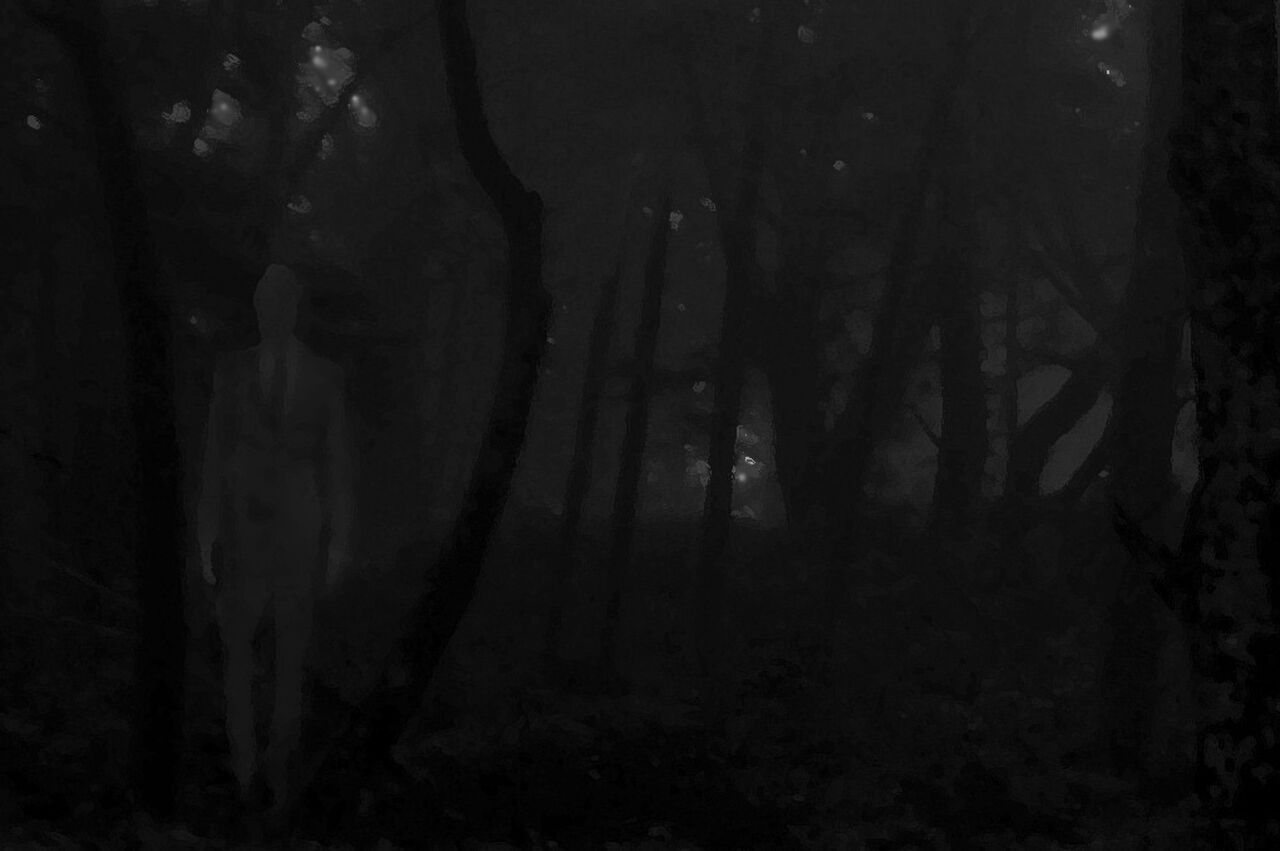 HE WAS NEVER REAL!!!

The fact you guys think he's real is RIDICULOUS!!!

Kastoway, the creator of Ticci Toby actually had to make an account to tell you all how ridiculous you're being. 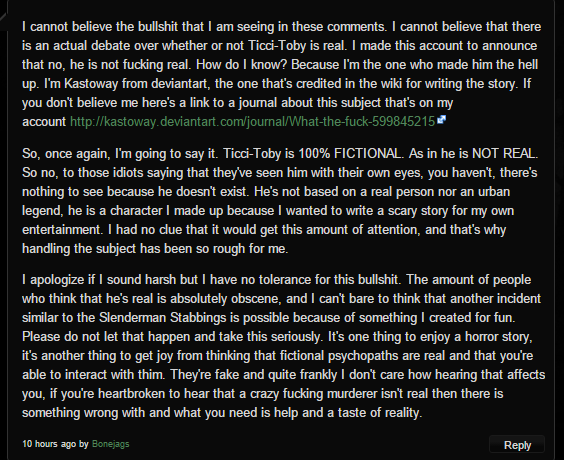 Shortly after this, I had to block an anon for calling Kastoway an idiot for pointing out that HIS OWN CHARACTER is not real.

IF YOU STILL BELIEVE IN TICCI TOBY AFTER SEEING THE CREATOR HIMSELF TELL YOU HE'S NOT REAL, YOU ARE RIDICULOUS, AND IN NEED OF MENTAL HELP.

And Kastoway is 100% right, if you're sad that a murderous psychopath is not real, something is wrong with you. That's like being upset that you'll never end up trapped in Silent Hill running from thousands of things that want to kill you or otherwise torture you, or upset that Jason from Friday the 13th will never try to kill you because he's not real.

This kind of thinking is what ultimately led to the stabbings in Wisconsin: Two girls WHO CLEARLY KNEW NOTHING ABOUT THE MYTHOS glamorized Slender Man, even making up their own bullcrap about him, and proceeded to try and make him happy by murdering an innocent.

At least most people who believe in Slender Man understand that what he does is evil, and that he would not want to be friends with them.

Something else: talking about how much you relate to him.

Is it really a good idea to say that just because you have one of his mental illnesses or disabilities, or just happened to have been bullied, that you "have so much in common and relate to him on a personal level" when that same guy is MURDERING PEOPLE?!?

I've met many people who went through just as many hardships as (if not more than) Ticci Toby, and turned out just fine (in comparison to a murderous child, anyway).

Ticci Toby is an example of the AxCrazy Trope and the Loners are Freaks trope, among many others. He is based on common portrayals of his conditions in fiction, not how those conditions work in reality.

You should not want to relate to him. If he posted his story on tumblr, everyone would rant about how offended they feel.

I'm sorry, but you've all crossed my breaking point. I've tried to be patient with you all, I have, but you are getting out of control with your fantasies. There was someone talking about how their friend would refuse to be friends with anyone who didn't believe in Ticci Toby. If you act like that, you need mental help, and possibly a good slap to the face for being a jerk who would be cruel to your "friends" for not believing in  an obviously fictional character from a creepypasta on the internet.

I don't idolize them I've always been drawn to horror stories and such my whole life. And yeah I need mental help we all do. Not every creepypasta fan believes they're real. I can openly say they are completely fake and made for horror junkies entertainment. The Slender Stabbings was younger children, impressionable children (may I remind you one had schizophrenia and also was the one who stabbed the friend) believed they were real. I am a 17 year old, I've been in this fandom for 4 years, and not once was I convinced they were real. I found comfort in the fanon fanfics written about because how I can relate to some of them including Toby. I was alone and needing comfort so I turned to people who couldn't judge me because they are FAKE. I get it Toby is a serial killer I'm not naive to that. But in fanon he's a loving carefree waffle loving soft boi and that comforted me. I have a substance addicted parent as he did. I lost people I've loved over the years to natural causes/accidents/ and suicide, I may not have tourettes or CIPA but I do have manic depression, BDD, anxiety, and ADHD. Toby was someone I felt a connection with in fantasy as a younger teen and through the years I've grown aware of how stupid and innocent it was but I'm not embarrassed to say I wished he was real. Because he was a grown man he understood how I felt and could the loving father figure I don't have anymore. It is not delusions or childish it is pure innocent longing for something I knew I'd never have.

He is. He's just not being used for any stories because the author doesn't like him anymore.

I respect Kastoway's decision, I think (and am pretty darn sure) Creepypasta's arn't real, just for a spooky story.

That, and the fact that a Chinese company just recently bought the rights of Toby.

I don't know what's sadder the fact that people actually think he's real, or the creator doesn't even like his own character anymore because of people. That's fucked up and sad. I always loved Toby. I don't see how people can say he's real?! He's a fictional character-- smfh.

That's the thing with fanboys, as soon as they get obssesed with something, they start to belive it's real, just ask Trevor Henderson with one of his creations like Siren Head or Cartoon Cat.

Tbh I love both canon and fandom Toby, also how is someone gonna say that Toby is real and get mad at the person who literally created him, that person has some serious problems

Yeah, good ol' fandom Toby with his "HEY MASKY" and his obssession with waffles.

What do you think?